From the everquest.com Community News:


Get Ready for 2017 With HUGE Savings and Bonus XP

Have we got a New Year’s surprise for you!

To wrap up 2016 and start 2017 off with a bang, we’re having a HUGE sale in the EverQuestMarketplace!

Beginning today and running through Tuesday, January 3 @ 11:59PM PST, the Marketplace discount for All Access Members will be increased to 40% off. 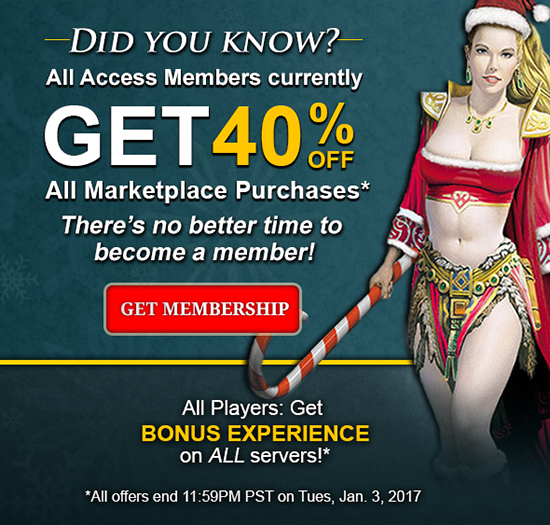 That’s 40% off many of your favorite items* – including the newest Frostfell additions! What has been missing from your collection that you just can’t wait to add? Now’s the time to get it!

We’re not just bringing savings in to the new year – we’re bringing BONUSES too!

In EverQuest, all players will receive 50% Bonus XP.

But hurry! The sale & bonuses will only last until Tuesday, January 3, 2017 @ 11:59PM PST. We hope you're able to enjoy this time of year with other Norrathians, and Happy New Year!

There is no better time to be a member! Want to learn more about all of the perks of All Access Membership? Click here!

*40% off discount does not apply to Krono, Expansions, or Memberships.

From a post by Prathun, EQ Developer, on the EverQuest forum:

Daybreak has scheduled some bonuses for the holiday season. Unfortunately, they have not released the schedule.

The best guess is that this weekend (December 24 and 25) there will be an experience bonus weekend. Exact details are yet to be announced.

Read here for the very little they have told us: https://forums.daybreakgames.com/eq/index.php?threads/bonus-xp-for-christmas-new-years.237292/#post-3491302
Posted by Fanra at 11:59 AM No comments: ALL PLAYERS will receive 50% Bonus XP, so if you’re looking to prepare for Empires of Kunark, now is the perfect time!

Gear up and get out there - you’ll only be able to take advantage of shortened lockout timers for the next 2 weeks!

From the everquest.com Community News:

For the next two weeks, ALL PLAYERS will receive 2X Rare Spawns and 2X Faction bonuses when adventuring across Norrath!

What are you waiting for? Call your guildies, get in game, and enjoy these limited-time bonuses!

As Norrathians prepare for EverQuest’s next expansion, EverQuest: Empires of Kunark, we’ve found many adventurers reminiscing about the first time they saw Kunark and the strange and mythical beasts that inhabited it.

One such creature is the Sarnak. First introduced to Norrath in the expansion The Ruins of Kunark, Sarnaks are Iksar/Dragon-hybrids. Once servants to the Iksar, Sarnaks famously revolted and claimed Chardok as their own.

In EverQuest, players have admired the might – and the vibrant appearance – of the Sarnak for many years. Now, if you’re an All Access Member, you can take on that appearance for yourself!

The illusion uses one of the classic character models that were first introduced when The Ruins of Kunark was released in 2000.

You can earn this item on every character, but you will need to log in with each character on which you want the item. Your account must have an active membership when you log in to be awarded this item. The Visage of Chardok Royalty is available to characters on all servers, including progression servers!


There will be a general maintenance on Monday, September 19, 2016 beginning at 6:00AM Pacific Time*. The estimated downtime is up to four (4) hours. The following services may be impacted during this maintenance:

Please follow @DaybreakGames on Twitter for any necessary updates. Thank you for your patience as we complete this maintenance.

NOTE: this is not a game-specific update; there will be no patch notes.


There will be a general maintenance on Tuesday, September 13, 2016 beginning at 5:00AM Pacific Time*. The estimated downtime is up to four (4) hours. The following services may be impacted during this maintenance:

Please follow @DaybreakGames on Twitter for any necessary updates. Thank you for your patience as we complete this maintenance.

NOTE: this is not a game-specific update; there will be no patch notes.

Daybreak has posted on the everquest.com website the September 2016 EQ Producer's Letter.

Here is the letter:

‘Tis the season to talk about our next expansion for EverQuest! The team has been working hard this year to manage the ongoing progression and event server updates, big server-side updates to improve stability, as well as toiling away on our new content-focused expansion this November. Speaking of the expansion…

While we are still in the throes of development, we are thrilled to announce we are returning to a much-loved continent of Norrath! Prepare for EverQuest: Empires of Kunark! We’ve got a new look for Sarnaks (perhaps an illusion for some?!), new zones like Scorched Woods, Chardok: War March, Lceanium, Droga, Kor’Sha, new monsters, armor, weapons, items and more!

It’s been many years since we’ve set our eyes on Kunark and there are many stories to discover. At the beginning of October, look for announcements regarding expansion features, for pre-orders to become available, and news about when you can join us in the beta. The launch of EverQuest: Empires of Kunark is scheduled for November.

Also on the horizon, we’ll be unlocking Luclin on Phinigel server on September 28th 2PM PDT.  Ragefire and Lockjaw also have some expansion votes coming in October and November.

As we start cooling down for fall and prepare for EverQuest: Empires of Kunark, we’ve got a few promotions for you too:

There is plenty more to come, so keep an eye out for more news and announcements soon. As always, we are grateful to all of our dedicated and thriving EverQuest players!

Daybreak has announced that Legends of Norrath will shut down permanently on August 17, 2016. The last day to purchase booster packs and claim monthly All Access free packs is July 18, 2016.

Here is the announcement:


For the past nine years, EverQuest and EverQuest II players have interacted with the world of Norrath through the Legends of Norrath Trading Card Game. Many of you have enjoyed its art, its strategic gameplay, and hopefully found that elusive Loot card granting one of our cool in game items.

Legends of Norrath has not had an active development team for quite some time and in the best interest of our company and players, we have made the difficult decision to close the servers on Wednesday, August 17, 2016 at Noon Pacific Time.

All loot rewards and packs in the Legends of Norrath client will need to be open and claimed on your character prior to when the servers close to ensure that your loot rewards are available in EverQuest and EverQuest II.

We know some of you are extremely enthusiastic about some of the items that were previously introduced in the Legends of Norrath TCG packs. These loot rewards will continue to be available to players through other means. Look to the Marketplace for packs which give an opportunity for rewards from previous LON sets.

We appreciate your understanding and continued support.

I just went into LoN to get my five free decks this month and checked for this and discovered it is live. No idea for how long.

Chalandria's Fang is an item that will summon poison once every 20 hours. The poison for all level 105 classes except rogues is

Chalandria's Bite XVIII. Rogues may get a different (better) poison, however this needs to be confirmed. Lower level toons (exact level / reward is to be discovered) get a lesser poison.


This information is from http://everquest.fanra.info/wiki/Adv...ndria.27s_Fang.

UPDATE: It appears this was for the month of May and is now over.
Posted by Fanra at 4:47 AM No comments:

If you have any comments or suggestions, email me at bahalper@yahoo.com